Press Releases
Back to Previous Page

April 16, 2012, Darmstadt, Germany — Merck Millipore, the Life Science division of Merck KGaA, has been named one of the world’s most effective rebrands in the 8th annual 2012 REBRAND™ 100 Global awards. This recognition is the highest achievement for excellence in brand repositioning, and is the first and most-respected global program of its kind.  The goal of Merck Millipore’s rebrand initiative was to support strategic branding during the merger and to define the brand’s positioning, vision, mission and promise that combines the best of both organizations.

“Achieving the REBRAND™ distinction reinforces the commitment of Merck and Merck Millipore to solidify the strengths of two well-respected brands to create a new identity that conveys the stronger combined force we now have to support our customers,” said Amanda Turton, Vice President, Communications, Merck Millipore.  “We are proud that Merck Millipore has received the REBRAND™ 100 Global award, alongside such prestigious companies as Cisco and UBS.  Our brand is an important symbol of our commitment to pioneering innovation, deep customer collaborations and trusted reliability.”

In June 2010, Merck KGaA, a pharmaceutical and chemical company based in Darmstadt, Germany, acquired Millipore Corporation, a leading organization with global headquarters in Billerica, Massachusetts, that develops and supplies tools and technologies to the life science industry. This powerful combination represents the best of both organizations, resulting in Merck Millipore offering the broadest range of products, technologies and services for pharmaceutical and biotechnology companies and academic professionals to optimize laboratory productivity and manufacturing processes.

Each year, a multidisciplinary mix of industry experts convenes to jury this annual competition.  Before and after representations of the transformed work with written summaries are reviewed to select winners.  Some review criteria ensure entries:

A rebrand is defined as the repositioning, revitalizing, restructuring, or redesign of some or all of an existing brand’s assets to address strategic goals. Rebrands launched anywhere in the world between January 2009 and September 2011 were eligible.  Among these were enterprise-wide efforts, changes in brand components, brand extensions, and brand implementation initiatives.

The goal of the Merck Millipore rebrand project was to support strategic branding during the merger and define the brand’s positioning, vision, mission and promise.  After which, the new look for the Merck Millipore brand was developed.  All brand elements, including the logo, design principles, typography and imagery were examined.  The focus was on conveying the new, powerful brand, without compromise.  Merck Millipore implemented the new look throughout all of the company’s sites and countries.  The organization developed style guides, messaging, in-house training and a brand hotline to provide a seamless transition to all employees to understand the standard and usage of the new global brand.

The 2012 winners represented over 28 countries and 34 industries.  They ranged from One Foundation from Global Ethics Ltd, Pfizer, National Music Centre of Canada, and Cisco. In addition to in-house teams, small agencies, and representatives of multinational corporations and non-profits, competing firms included Interbrand, SNK, Lippincott, Siegel+Gale, and Brandient. 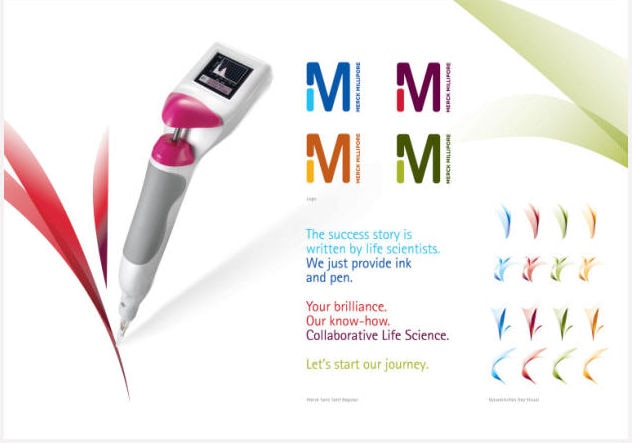 About Merck Millipore
Merck Millipore is the Life Science division of Merck KGaA of Germany and offers a broad range of innovative, performance products, services and business relationships that enable our customers’ success in research, development and production of biotech and pharmaceutical drug therapies. Through dedicated collaboration on new scientific and engineering insights, and as one of the top three R&D investors in the Life Science Tools industry, Merck Millipore serves as a strategic partner to customers and helps advance the promise of life science.

Headquartered in Billerica, Massachusetts, the division has around 10,000 employees, operations in 67 countries and 2011 revenues of EUR 2.4 billion. Merck Millipore operates as EMD Millipore in the U.S. and Canada.

About Merck
All Merck Press Releases are distributed by e-mail at the same time they become available on the Merck Website. Please go to http://www.merck.de/subscribe to register online, change your selection or discontinue this service.

Merck is a global pharmaceutical and chemical company with total revenues of € 10.3 billion in 2011, a history that began in 1668, and a future shaped by more than 40,000 employees in 67 countries. Its success is characterized by innovations from entrepreneurial employees. Merck's operating activities come under the umbrella of Merck KGaA, in which the Merck family holds an approximately 70% interest and shareholders own the remaining approximately 30%. In 1917 the U.S. subsidiary Merck & Co. was expropriated and has been an independent company ever since.

About REBRAND™ and the REBRAND® 100 Global Awards
REBRAND™ is the world’s leading resource for effective brand transformations.  The REBRAND 100® Global Award is the first and most respected recognition for repositioned brands.  Featured in such media as The Wall Street Journal, CNN Money, Bloomberg Businessweek, various magazines and books, the annual competition has entry deadlines in late September.  The full 2012 winners showcase is at www.rebrand.com.